Salvador Dalí has been one of the most famous and influential artists of the XXth century. With his long and controversial life, he contributed to broaden the borders of artistic expression by exploring and representing the subconscious.

Here is a short biography of Salvador Dalí and a selection of 5 artworks that I particularly love.

The 11th of May 1904 was a special day for Figueres, a small town in Catalonia close to the French border. After that day, the world wouldn’t have been the same anymore. At 8:45 am one of the most influential, brilliant, peculiar, and polyhedric artists would come to life: Salvador Dalí.

He was always encouraged to practice his art and eventually he ended up studying at the Real Academia de Bellas Artes de San Fernando in Madrid. This was a period of solitary and intensive studies. He would go every Sunday to the Prado museum to study the work of the great masters.

Besides his talent, his eccentricity would grow up exponentially as well. He would dress up in the style of English Aesthetes of the late 19th century, with long hair and sideburns. 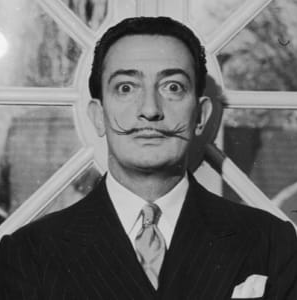 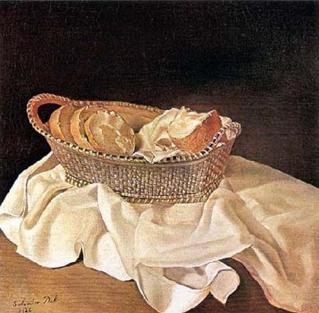 The basket of bread, Salvador Dalí 1926

On the artistic side, it was a prolific time. He was influenced and fascinated by Metaphysics and Cubism and became a good friend with the poet Federico García Lorca. These influences lighted up his personality and Dalí ended up being suspended from the academy in 1923 for criticizing his teachers. That same year, he was arrested and (briefly) imprisoned for suspected relations with the Separatist movement. In 1926 he could come back to the academy, but shortly before his final exams, he was permanently expelled for assuming in public that no professor of the faculty was competent enough to examine him.

1926 was a crucial year in Dalí’s life. He went for the first time to Paris, where he met Picasso. By this time, Dalí was influenced by Impressionism, Futurism, and Cubism. Through Joan Miró and René Magritte, who also lived in Paris, Dalí was introduced to Surrealism.

Including the subconscious in his works was a logical step for him. Even before this period, Dalí was a big supporter and avid reader of Freud’s psychoanalytic theories.

By now, only one thing was missing in Dalí’s life: love. It came in the vest of Elena Dmitrievna Diakonova, a Russian immigrant also known as Gala. She became soon his muse and inspiration and counterbalanced Dalí’s eccentricity, taking care of his legal and financial matters. 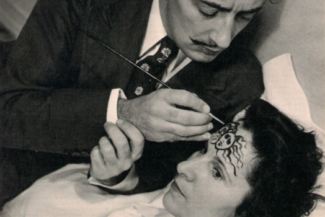 Although Dalí was one of the most famous Surrealists, he got expelled from the movement in 1934. Officially, the expulsion was due to “counter-revolutionary activity involving the celebration of fascism under Adolf Hitler”. Unlike other members, including Picasso, Magritte and Miró, he didn’t take a stance against Francisco Franco.

From 1940 to 1948 Dalí and Gala moved to the United States, before going back to Catalonia. The next 15 years would be full of artistic inspiration and production. From 1960 to 1974 he began working at the Dalí Theatre-Museum. 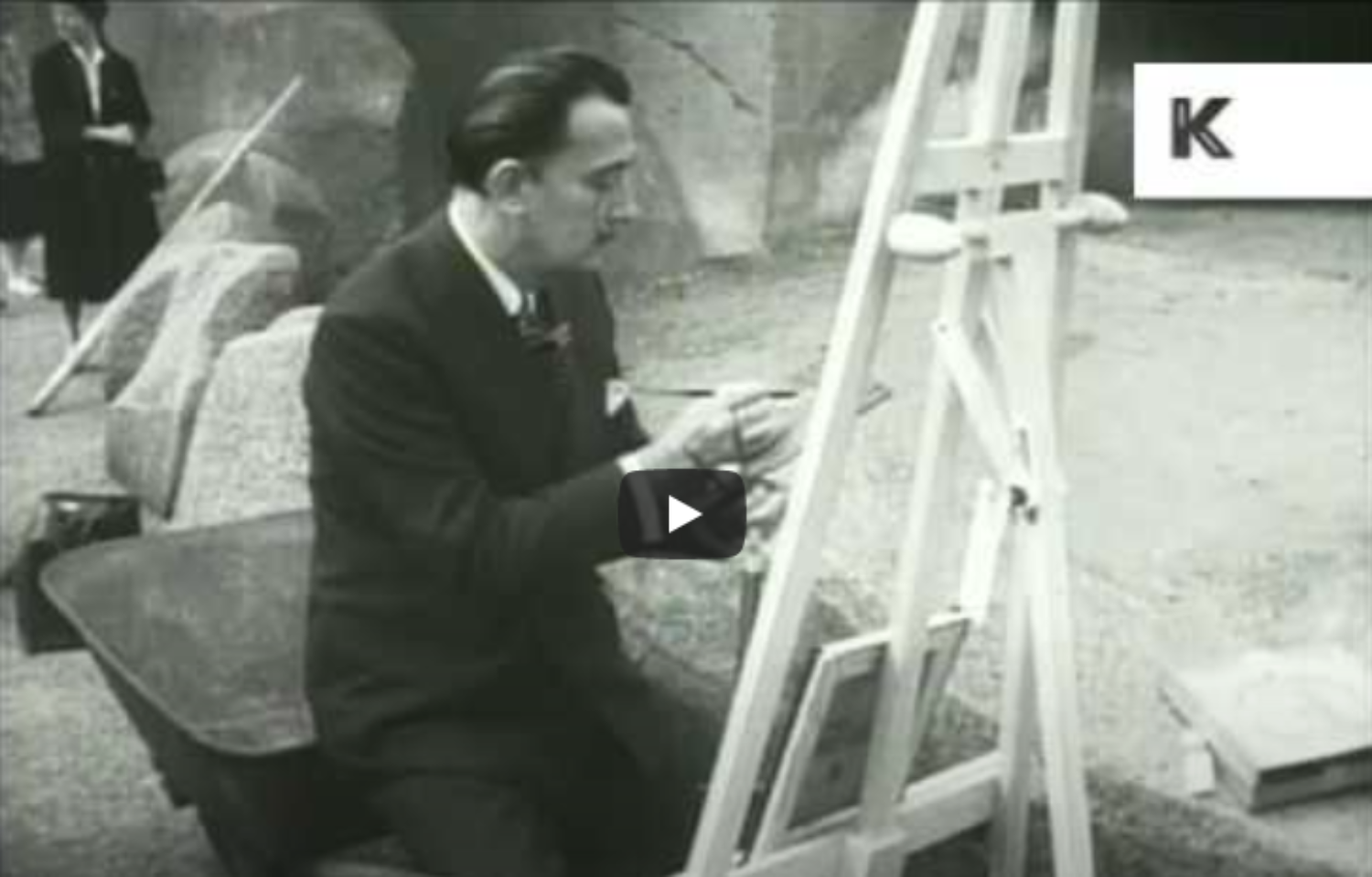 His final years were destroyed by 3 events: due to a motor disorder, which would impede him to hold a paintbrush, Dalí had to retire from painting. In 1982 his beloved Gala died, dragging him into a deep depression. In 1984 he was severely burned in a fire and he was confined to a wheelchair.

On the 23 of January 1989, Salvador Dalí died in his hometown Figueres. 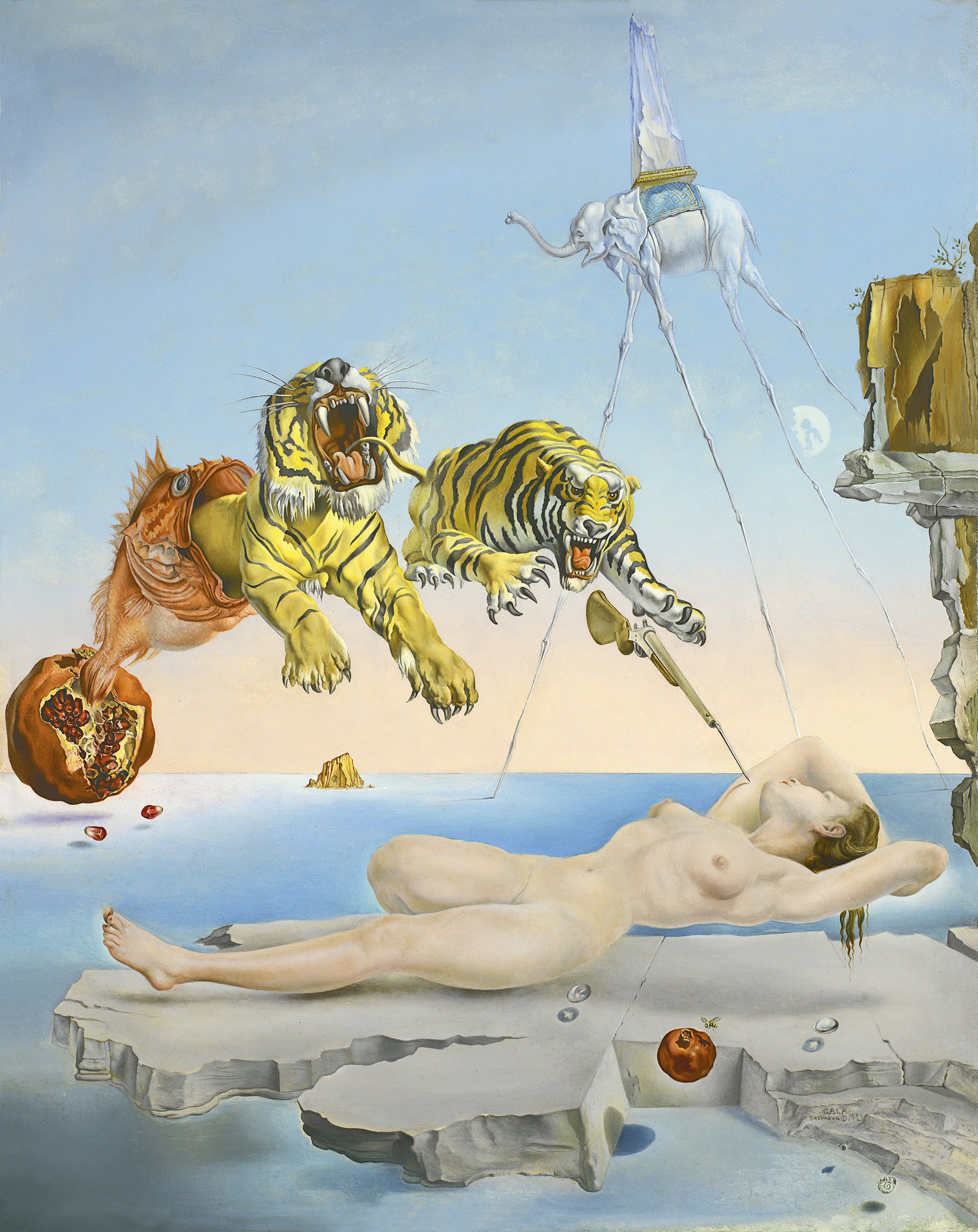 Dream caused by the flight of a bee around a pomegranate a second before awakening (1944).

Dalí used to call his paintings “hand-painted dream photographs”, the perfect definition for this artwork.

As the creator said, this painting was created to depict “the consequence of the instantaneousness of a chance event which causes the sleeper to wake up. […] Thus, as a bar might fall on the neck of a sleeping person, causing them to wake up and for a long dream to end with the guillotine blade falling on them, the noise of the bee here provokes the sensation of the sting which will awaken Gala.”

The subject of the scene is Dalí’s wife Gala, lying naked on a flat rock that floats above the sea. Next to her, there are two drops of water, a flying bee, and a small pomegranate, used as a Christian symbol for fertility and resurrection. On the upper left of the canvas, a pomegranate releases a giant redfish, who in turn releases two ferocious tigers, which together with a bayonet would soon awake Gala from her rest.

In the background, Dalí’s first use of the famous elephant with flamingo legs. 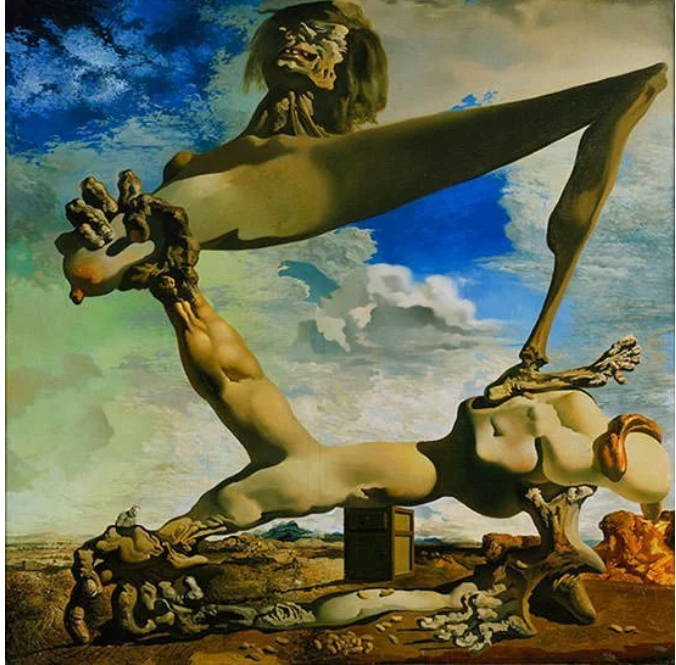 This artwork was finished six months before the beginning of the Spanish Civil War when Francisco Franco took the power.

It depicts a colossus who aggressively destroys himself, contorting his limbs into an outline of a map of Spain. There is no victor, the colossus will destroy himself as well as a country destroys itself in a civil war.

Despite the meaning of this artwork, Dali never took a stance against fascism and Francisco Franco. 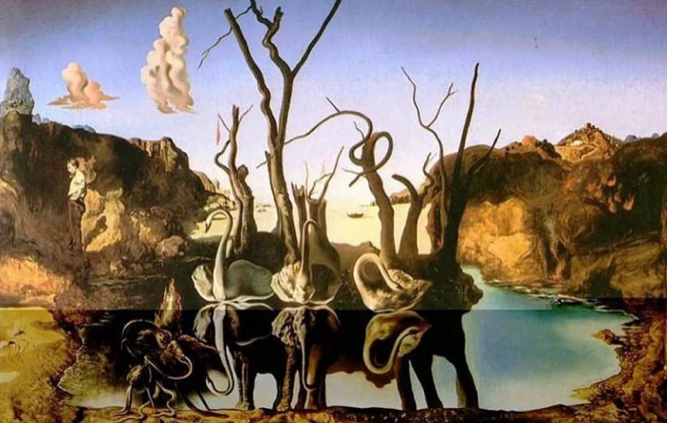 A perfect example of the paranoid critical method, used by Dali to get new impressions of reality. The painting depicts swans on a placid lake. In water though, they form together with the trees behind them three elephants, their necks being the trunks of the elephants and the trees being the legs. On the left side, a thinking man gives his back to the scene.

As for many of Dali’s paintings, giving a unique interpretation is hard. What we know is that elephants are sympathetic and clever and represent strength and unity. Swans represent love, music, poetry, and art. Maybe the mesmerizing of the two reproduce the swing between logos and pathos.

The persistence of memory

This is maybe the most famous painting of Dali. The artist never explained the meaning behind it, so what we have – as well as with other works of his – are just interpretations.

Many commentators suggested that the melted watches are an internalization of Einstein’s theory of relativity. The artist himself replied that he got the idea while watching Camembert cheese melting in the sun. Some see the ants (on the orange pocket-watch on the left side) as a representation of decay. The deformed face in the center could be a sort of hidden self-portrait.

The explanation that resonates the most with me assumes that the aim of this painting was to depict the relation between actual time and remembered time.

The singular approach of Dalí made him one of the most popular artists of the XXth century. He literally lived an artistic life, as eccentric and unconventional as he could be.
His political positions were never clear. Even though colleagues and experts point at him as a fascist, he never took openly a position.
The artworks he left behind leave room for personal interpretation, offering the chance to personalize his art.