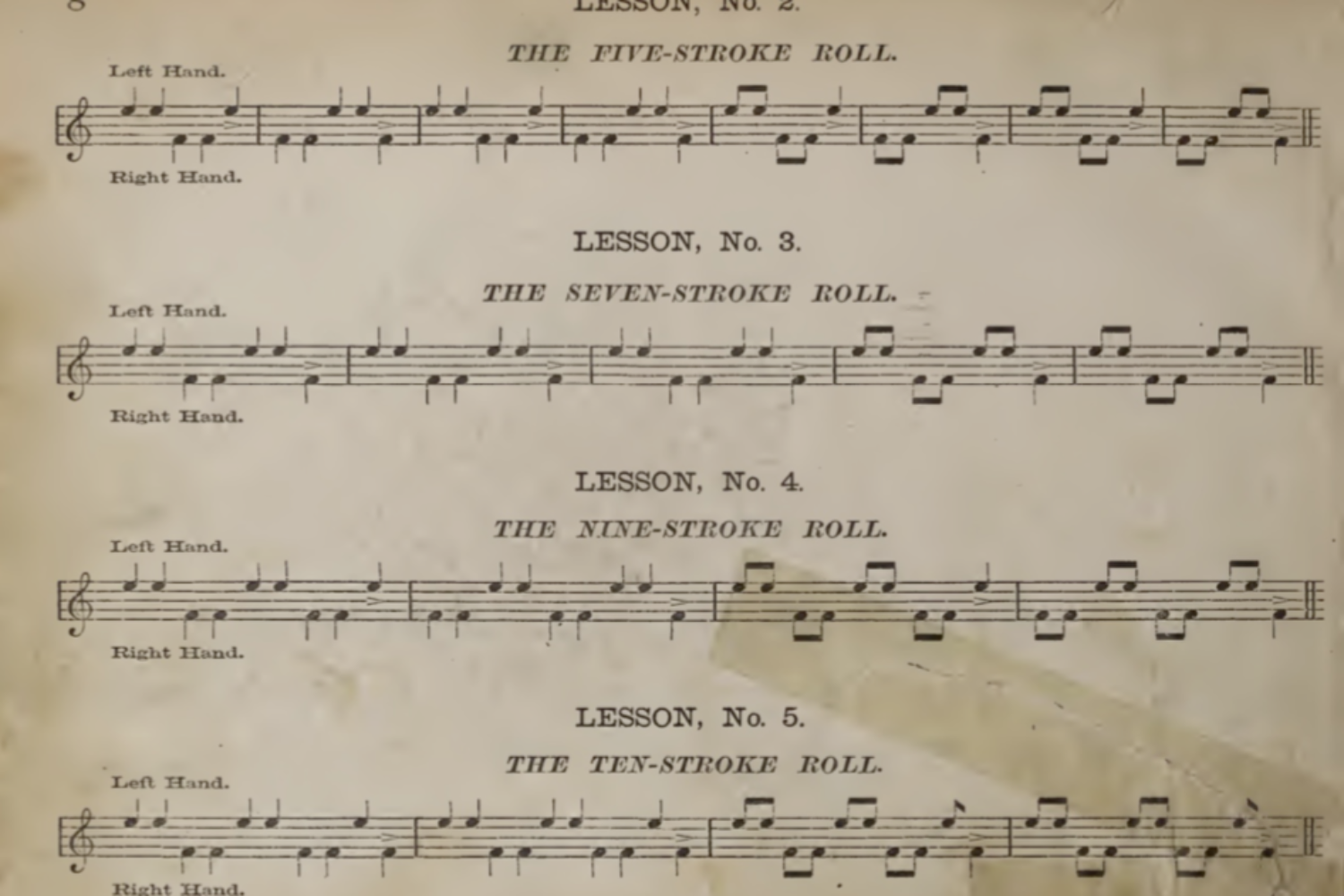 With my article “A brief history of the Drum in Europe” we covered more or less 8000 years of history of our instrument from 6000 BC to the XXth century. With this article, we step into our “modern” history. Let’s see what it’s all about.

A bit of a frame

One cool thing about culture is that it travels unnoticed adapting itself to a new environment. That’s what happened with the Drum tradition, going from the British Isles to America.

In 1778, three years after the beginning of the War of Independence, Baron Friedrich von Steuben published “Regulations for the Order and Discipline for the troops of the United States”. This came as a direct amendment of President George Washington, in order to regulate and train the revolutionary troops. This work is one of the first containing a list of rudiments and military drum calls in America.

16 January 1812 Charles Ashworth publishes “A new useful and complete system of Drum Beating”, a collection of all rudiments, drum calls, and camp duties in use by the US navy. Here is to find a list of 28 rudiments with several common traits with the “modern” rudiments, as for example starting with the left hand.

This is the first time that the word rudiments appears on a book. On page 3 Ashworth writes: “Rudiments for drum beating in general”

In 1862 George B. Bruce and Daniel D. Emmet publish “The Drummers’ and Fifers’ guide” and seven years later in 1869, Gardiner Strube writes “Drum and Fife instructor” on behalf of the National Guard of the States of New England. 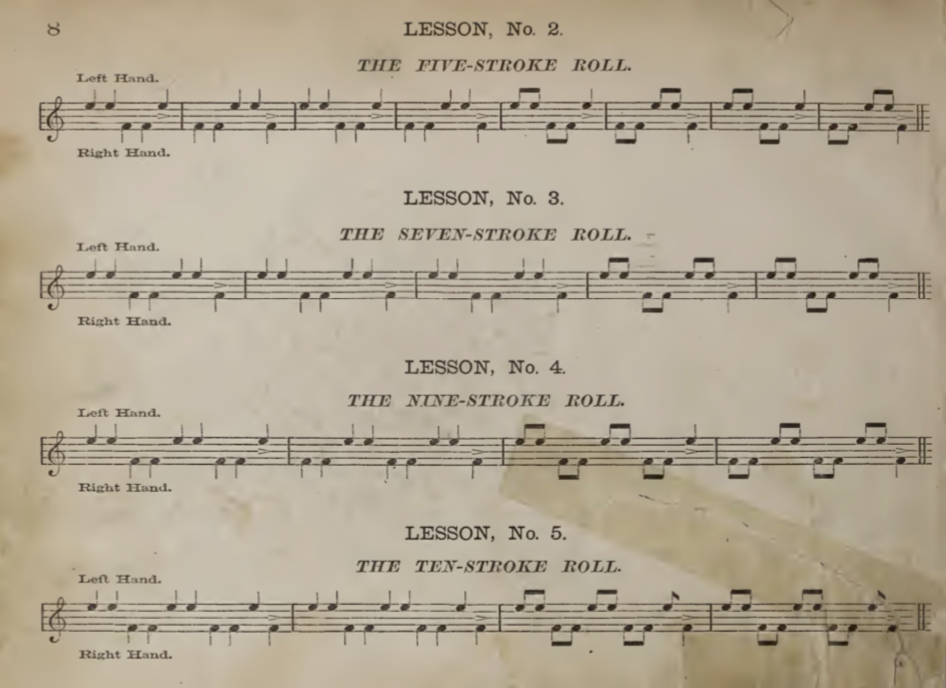 A common trait of these works was the tendency to standardize the number and style of the rudiments. In chronological order, several drummers made their contribution: in 1886 John Philip Sousa writes “The trumpet and drums” and in1925 Sanford Moeller releases “The Moeller Book: the Art of Snare drumming”.

In order to see this question solved, we need to wait until 1933, when 13 drummers gathered and gave birth to the National Association of Rudimental Drummers.

In 1932 thirteen well known teachers, composers and performers met during the American Legion National Convention. William F. Ludwig, one of the founders said about the meeting:

«We talked and played the rudiments six hours well into the morning. But we felt that we had saved the drum rudiments by adopting a practical set of rudiments without deviation from any of the then recognized and established methods. »

They were concerned that the style of rudimental drumming – as they learned it from Civil War
veterans – was slowly getting lost.
The members recognized Strube’s work as a valid starting point. They worked it out, adding the
long roll and get to a list of 26 rudiments.
The first 13 rudiments are called “essentials” and the second 13 “auxiliary”. Together they form
the 26 American Standard Rudiments. 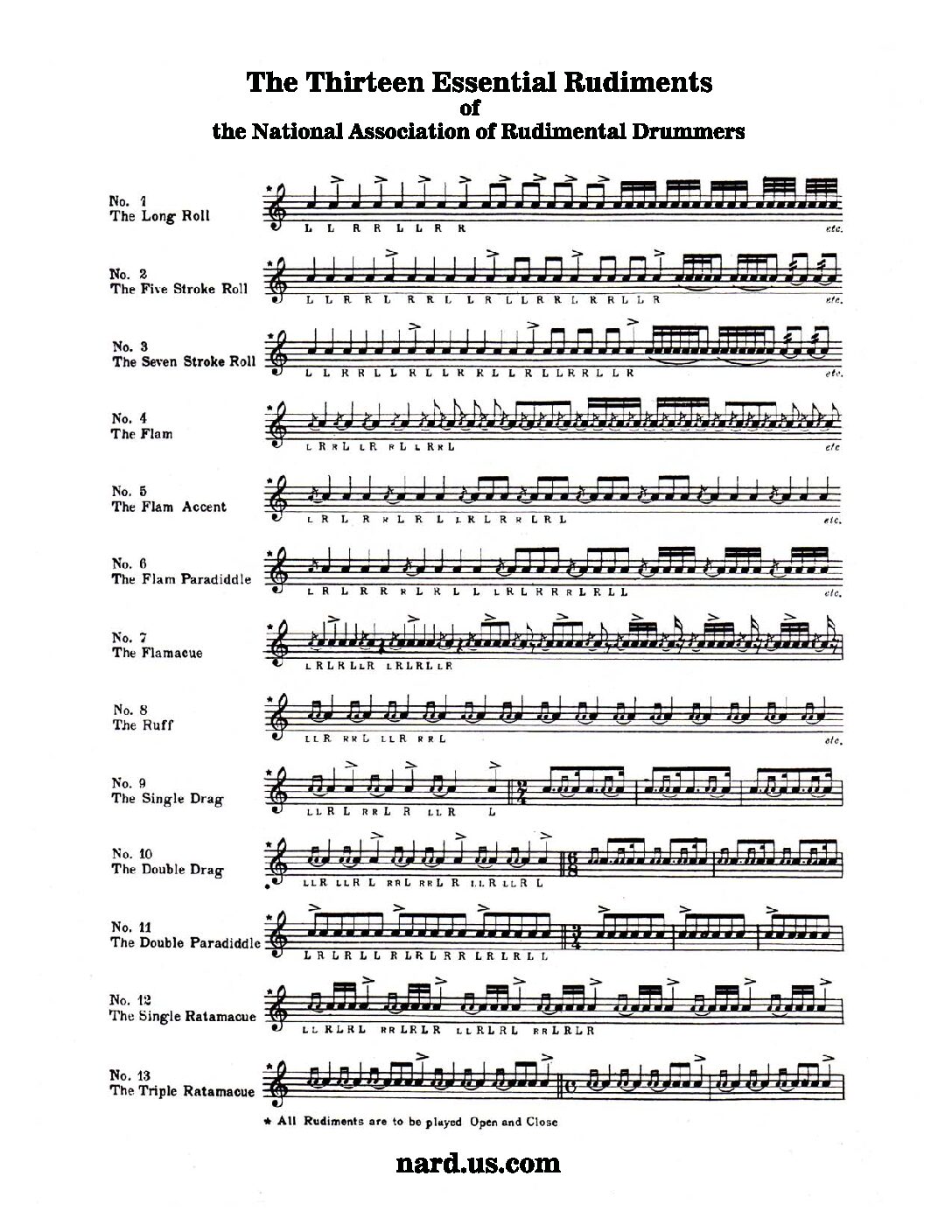 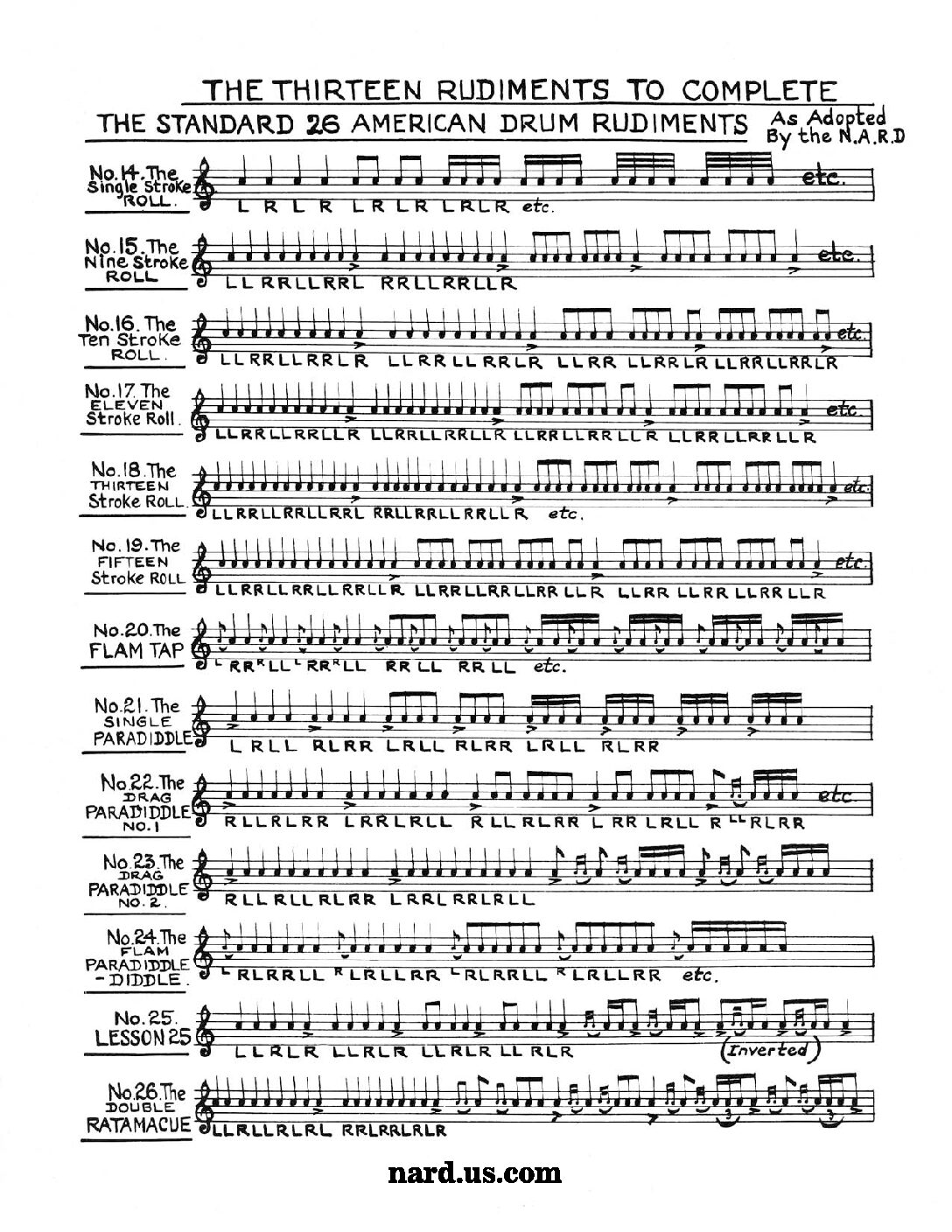 BILL KIEFFER – Drummer with the U.S. Marine Band and judge in both the National Legion Individual Drumming and Drum Corps contests held in Chicago.

LARRY STONE – Instructor, teacher and composer of many instruction books. Snare drummer of

ED STRAIGHT – Chicago’s most popular theater drummer and composer of many instruction books.

Officially NARD was disbanded on December 31, 1977, but the legacy and the passion written in the hearts of the members and the passionate drummers kept the flame burning.

On December 31, 2008 (75 years after the foundation!) something incredible happened:

«It is with great pleasure that we, the surviving members of N.A.R.D., reactivate the National Association of Rudimental Drummers for all to enjoy and play a role in maintaining the history & integrity of the Art of Rudimental Drumming. »

Today it’s still possible to become a NARD member. You can find conditions and instructions at https://nard.us.com/Join_N.A.R.D..html

Percussive Arts Society is on its way with a list of 40 rudiments. There will be discussions about the names of the rudiments, the list will be changed.

What hit me and filled me with admiration for him, was a paradigm shift brought by Mr. John Pratt:

"« Drum rudiments are exercises. The rudiments of drumming are Strokes! » "

Thanks for reading my article, if you found it useful or would like to send tips, please get in contact!